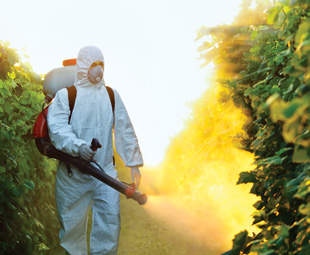 So-called “farmer’s lung” and organic dust toxicity syndrome are allergic reactions to dust from mouldy hay or grain and may result in costly medical treatment, permanent lung damage or death. In many cases, an inexpensive respirator could prevent farmers from acquiring nagging, permanent lung damage caused by long-term exposure to dusts, mists, gases and vapours.

The first consists of particulate contaminants, which include dusts, mists and fumes. Dusts are usually the largest particles, but not all dusts can be seen with the naked eye. Mould spores, for example, are microscopic.

They are released when mouldy hay, silage, or grain is disturbed. Mists are suspended liquid droplets and are usually found near mixing, spraying and cleaning operations. Fumes are solid particles of evaporated metal. They are microscopic and are formed during activities such as welding.

The second category comprises gases and vapours. Gases are chemicals that are gaseous at ambient (room) temperature. Examples include: hydrogen sulphide, the deadly manure-pit gas; nitrogen dioxide, which can be found in conventional silos; and carbon monoxide from operating internal combustion engines. Vapours are released from liquids such as pesticides, paints, adhesives and lacquer thinner.

The third category is an oxygen-deficient atmosphere. Causes of this include: manure storage, oxygen limiting (sealed) silos and controlled atmosphere storage for fruits and vegetables.

In such structures, the oxygen content of breathable air, normally about 21 percent, is reduced to levels as low as five percent. The reduction in oxygen may occur deliberately, such as with controlled atmosphere storage, or oxygen may be displaced by other gases as in manure storage and conventional silos.

Once you’ve pinpointed the hazard (or hazards), and before resorting to a respirator, try to reduce or eliminate the source of the problem. For example, use a different management practice when harvesting and storing crops to reduce dust and mould; provide improved ventilation in your barn; and use a non-toxic or less-volatile pesticide. If, after trying to reduce or eliminate the hazard, you are still at risk, use a respirator.

Please note that a nuisance dust mask is not an approved respirator. This type of mask offers some protection against large particles of dust, but not against smaller particles that may enter deep into the lungs and cause respiratory distress or disease.

There are two categories of respirators: those that purify the air and those that use supplied air. Air-purifying respirators are equipped with filters through which the user breathes. These respirators do not supply oxygen. Therefore, they should not be worn in areas considered immediately dangerous to life or health, such as oxygen-deficient areas (oxygen-limiting silos, for example) or highly toxic atmospheres (manure storage pits).

Air-purifying respirators are good in areas such as barn lofts with mouldy hay, fields during tilling or pesticide application, as well as construction sites where fibreglass or wood dusts are likely to be found.

Supplied-air respirators are the only ones to be used in areas considered dangerous to life or health. There are two types: air line respirators, which provide clean air through a hose, which is connected to a stationary air pump or tank; and a self-contained breathing apparatus, which has a portable air tank that is carried on the back like those worn by scuba divers and fire-fighters. 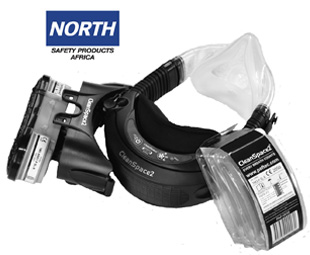 The one-piece unit weighs less than 500 g. North marketing manager Lizette Kasselman says that a soft silicone mask and cushioned power unit fits around the back of the neck. “This ensures that the user is screened from hazardous particle matter from 0,3 microns. To prevent contamination, the breath-responsive respirator intelligently adjusts airflow, thereby maintaining positive pressure inside the mask.”

This also serves to maximise filter life by only purifying air that the user breathes in. The CleanSpace2 is compatible with other head-worn personal protective equipment (PPE) and can support work in the harshest conditions with a continuous running time of six hours.

“Care is made easy with an improved filter cover for quick and intuitive replacements, and the mask can be washed in warm soapy water or on the top shelf of a dishwasher,” observes Kasselman. CleanSpace2 should operate service-free for up to three years. 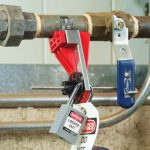 Prev “Go for zero” with lockout/tagout
Next Going in the right direction, at last! 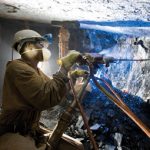