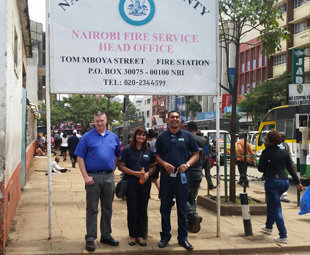 More than 1 100 sets of personal protective equipment (PPE), valued at US$ 5 000 (over R80 000), are being refurbished by MSA Africa in a partnership with non-governmental organisation Africa Fire Mission (AFM).

The project aims to empower and uplift fire brigades and communities in Africa by improving fire safety. This PPE equipment will be donated to fire brigades in Kenya and Zambia.

Suraksha Mohun, MSA Africa respiratory and fire helmets product manager, explains that many countries in Africa still struggle with fire equipment and protection, due to a lack of knowledge, procurement and political issues. “It is often not a priority for fire departments to get the basic equipment that they require,” she states.

According to AFM executive director, David Moore, the Kenyan capital city, Nairobi, had two fire engines and 154 firefighters in 2012. “Their PPE was predominately construction helmets, raincoats and plastic boots. They only had two working self-contained breathing apparatus’ (SCBA). They were unable to refill them, so they were rarely used.”

MSA Safety has provided parts and the labour to rehabilitate the SCBAs and has also rehabilitated around 50 SCBAs that will soon be donated to more African countries.

The company will also be providing the tools, training and equipment such as helmets, gloves, fall protection, BA bottles and parts, to assist the local fire brigades in increasing their sustainable fire protection capacity.

“Furthermore, MSA Africa has sent representatives from South Africa to both Lusaka and Nairobi to provide training and demonstrations on its equipment, which was deemed incredibly valuable to the firefighters in those countries,” Mohun continues.

In late 2016, the remaining fire departments in Zambia will receive a shipment with equipment to fully prepare them.

“MSA Africa and AFM will jointly continue to provide opportunities for fire brigades in Africa to access SCBAs and other much-needed fire safety equipment. This year, MSA Africa plans to bring more knowledge and mobilise support for these initiatives, through presentations and fire industry meetings,” Mohun concludes.